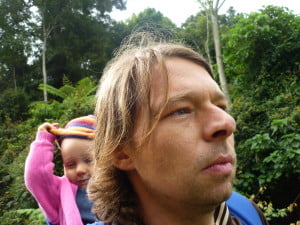 Where did those chubby cheeks go??

Paleo allows us to have our grain-free cake and eat it too.

A good diet should not be measured by weight loss alone, but how one feels overall.

Paleo has been responsible for curing diseases and alleviating chronic pain, such as back pain and migraines.It can improve mental health, cure diabetes and give pain relief to many, suffering from auto-immune disease. (If you don’t know what that is – think yourself lucky).

Despite feeling great, I gave in to curiousity this week and I finally bought myself a set of scales – and guess what? I have already lost three kilos. My goal weight is 58 and we aren’t even at the two week mark yet!

I really didn’t think I would lose much, due to the fact that I regularly eat Paleo, but I was wrong.
Luckily, I kept all of those skinny clothes in the bottom of my closet. I am a true optimist.
I have known about the weight loss now since Monday, but have been hesitant to write about it. I really want the improvement of health to be a bigger issue than weight-loss.

Unfortunately, weight-loss sells and it’s what people want to hear – right?
Are you interested in a lifestyle that makes you feel good or look good?
Luckily Paleo provides us with both.
I certainly notice the mental clarity achieved by the 30 day challenge and Paleo in general. The brain fog is gone, I feel extremely alert in the morning and I have far more patience and energy for the kids.
So while I make this concession of emphasising the weight-loss factor in order to sell…….please check out my Paleo holiday products. I will also be publishing a recipe book with tips for the 30 Day Challenge soon. (when I dreamt of writing a book, I certainly didn’t ever think it would be about recipes…not lame right?)

While I am bragging about weight-loss today, I might as well go all the way and show you some before and after shots of my husband. Who lost 20kilos in the first five weeks of Paleo. He didnt even exercise, just kept working on his PC. It was truly incredible.

Initially, we read about Paleo online and decide to give it a go, but still eat dairy.
We were deeply connected with cafe lattes and were not prepared to surrender them. Lutz would even make little love hearts and leaves on top with the foam.

No, we were not going to give up the luxury of the latte.

SO we started this +dairy version of Paleo, around September 2010 in Australia. Nothing much happened for the first few weeks until, I purchased Paleo Solutions by Robb Wolf.
His book was so convincing, that we then bade a sweet farewell to our milky lattes and took the plunge.( the coffee plunge :). Changing to black coffee is a serious sacrifice)

We started by giving away everything non Paleo in our kitchen cupboards, to family and hit the grocery store and farmers markets with a new way of thinking, less packaging and healthier bodies.

It was a whole new way of cooking. I had to think totally outside of the box. Lutz was often in the kitchen experimenting and as a couple, I think it brought us even closer together. Lutz had had chronic back pain, migraines and blood results that were not healthy. All of this changed when we swapped to Paleo.
Admittedly we often swap our long, lost, beloved lattes for an espresso macchiato ( espresso shot with just a bit of milk foam), as a treat occasionally. Some habits die hard.

What do we do?

We offer healthy lifestyle tips. We offer holistic retreats. We offer coaching and Human Design readings. We offer nutritional planning. We offer ebooks that include recipes and life hacks. We offer education and growth through events.

We offer ayurvedic treatments, colonic irrigations, ozone water, juicing programmes, city stays, elephant and cultural tours. Just tell us what you want and we will make it happen.